Every year meteorological experts around the globe weight in on how they think the upcoming storm season will play out. Analyzing data such as sea surface temperatures, weather patterns and past weather events they are able to predict how many cyclones or hurricanes will occur. (Cyclones and hurricanes are both tropical revolving storms one occurring in the southern hemisphere, cyclones, and the other, hurricanes in the northern hemisphere.)

With the South Pacific cyclone season officially underway (beware the magic date on the calendar) there has been lots of chatter about this year being an El Nino year.And a strong one at that.

What does that mean?

We are by no means experts on the topic but as far as we can understand El Nino is a trend for sea surface temperatures east of the dateline, and as far east as South America, to be higher than normal. In terms of weather it indicates that the nasty twirly storms will be drawn further east as well, but by no means does that mean the western Pacific will be spared. What is the most concerning of all the stats and forecasts that have been thrown around recently is the drought they are predicting to affect a large swath of the South Pacific.

The 2014-15 cyclone/wet season we spent in Fiji last year was a fairly dry one, at least on the western side. The wet weather gear that we brought home from Australia stayed dry until we were on passage in May and the water collection spigot that I installed in our bimini has yet to be finally fitted because it hasn’t rained hard enough to properly test it.

Compare that to the cyclone season we spent there in 2013/14 where the boatyard turned into a mud wrestling pool for days on end and violent electrical storms lit up the horizon on a regular basis. Or the 2012/13 season when we tried to paint the boat and had 6 weeks of rain delays.

In March 2015 cyclone Pam, a category 5 storm, spun her way across Vanuatu.

Destroying almost everything in her path with 300+ km/h winds, not only did she rip apart houses but precious water collection tanks as well. Like most places in the South Pacific outside major towns people in Vanuatu depend on rain collection as their main source of water. Couple the lack of collection tanks with the with the fact that over the last several months there has been almost no rain in Vanuatu and the Ni-Van people are already in a precarious position, and it is only November.

Everywhere we’ve visited, every island we’ve stopped at while in Vanuatu, water has been the main topic of conversation. And if you didn’t speak the language the dusty, burnt landscape would be enough to tip you off. The Vanuatu we’ve seen looks vastly different from the pictures in our guidebooks. 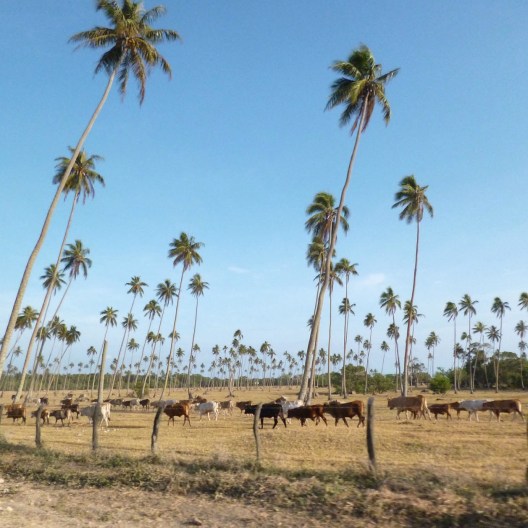 Using the cellphone network, which extends to almost every island in the archipelago, the government is now issuing almost daily text messages about water rationing, taking care of animals and how to try to sustain crops. Major towns with running water in every home are already talking about rationing. On the front page of the newspaper last week in Santo I read an article about cattle dying from starvation. Vanuatu is known for its world class, organic beef and without water there are major economic ramifications for this year’s exporters.

And even sadder is the reports on the radio of children dying in some of the more remote villages. Without rain there is no water collection. Without rain crops can’t grow. With a population that is mostly collection and subsistence that has deadly serious implications.

I mention all this because this morning we are making water.

We do this couple of mornings a week. Our engine-driven, reverse osmosis watermaker that Steve designed and installed before we left San Diego pumps out about 60ltrs of clean, clear water an hour. Reverse osmosis uses a semi-permeable membrane and high pressure to turn, in this case, salt water into fresh water. As long as we have relatively clear seawater we can make drinking water measuring anywhere from 150-250 parts per million of dissolved solids. Not bad when the WHO standard for potable water rings in at 500ppm. 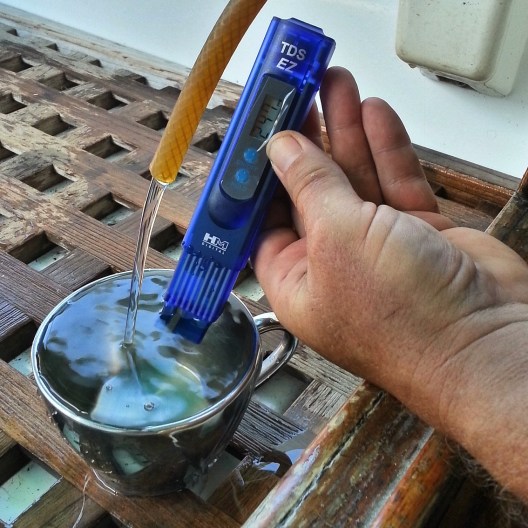 I’ve read other sailors wax on poetically about us watermaker users missing the opportunity to meet islanders around the local watering hole, literally, and the romance of washing the laundry on a verdant tropical island. I’ve heard them sneer at us about ignoring what falls free from the sky and accusing us being slaves to our engines. (This last one I find particularly amusing as these are often the same people who are willing to motor for days on end while on passage when their SOG drops below 3 kts.)

The only thing I can say to them is that during times like these, where water is in desperate lack for the locals, I am happy that we don’t have to burden them.  Not only are we self-reliant but we have the means, if the situation should arise, to actually help people. We could do more than bring the tourist dollar or give away an old ragged t-shirt. We can make water, one of the essentials of life.