A while ago I came across the website of Nike Steiger, www.whitespotpirate.com. Nike is a woman who bought an unloved boat in Panama, fixed it up and went sailing. Alone.

Before setting off she had very little sailing experience, and none single-handing. The project was part of her plan to conquer her ‘White Spots’. White Spots, she writes, are “undiscovered areas on each individual’s personal map of life. They’re not necessarily places you want to go, but can be any kind of dream that you wish to come true.”

She makes short videos of her adventures called UNTIE THE LINES which she posted on the white spot website and on YouTube, check them out. She also challenges everyone to “put their dreams into reality,” and conquer their own white spots. Which got me thinking.

I don’t have any BIG white spots at the moment.

Or at least not ones that I can address while on board. (I do want to ride my own motorcycle on our next bike adventure but that will have to wait.) But, like everyone I do have things I would like to overcome. The first is my fear of driving the boat.

This may sound crazy since we have been onboard for almost 9 years but I don’t drive very often. That is I don’t like to take the wheel when we are motoring. I have no problems sailing the boat. I sit night watches and make course corrections. I have sailed her on and off moorings and anchor. Need someone to clamber up the mast to reef in 35kts, waves washing over the deck? I am your girl. But I have a fear of being the one on the helm when the engine is running.

Because way back in Costa Rica, during our first year sailing, I happen to be the one who was holding the wheel when the flex plate exploded and jammed in the fly wheel basically seizing the whole engine. We managed to fix the problem only to have our repair explode a few weeks later and guess who was behind the wheel again then?

So, the rational side of me knows I had nothing to do with the engine problems but the slightly superstitious side of me thinks that perhaps I am cursed. I mean what’s the chances of me, who didn’t drive much in the beginning anyway, being the one who turned the key when the engine exploded…twice? Needless to say I have been happy to let Steve, who has decades of driving boats professionally, take the helm.

This really hasn’t been much of an issue because since Costa Rica both me and the engine haven’t been the same, so we kinda just stopped motoring unless completely necessary. We did major engine work in Fiji (the details of which I won’t bore you with) and now things are running better but old habits die hard and we still don’t motor much.

However this season in the Solomon Islands it has been impossible to sail some days; both for lack of wind and because the lagoons are uncharted, shallow and maneuvering is rather confined. So we’ve put a lot more hours on the engine than we’d like, usually with Steve driving and me standing lookout for bommies and reefs on the bow.

But the other day, inspired by Nike and her White Spot theory I volunteered to take the wheel for the day and navigate us through a rather tight spot in the Vona Vona lagoon. We’d already gone through this particular passage a couple times so I was familiar with the hazards; zero visibility in less than 4M of water and inaccurate charts that show the boat on land.

I was (mostly) confident that everything would go well.

And it did! I didn’t run aground, the engine didn’t explode and best of all Steve got to sit back, sort of relax (while keeping a keen eye out for rocks) and enjoy a nice cold beer on a rather hot afternoon. 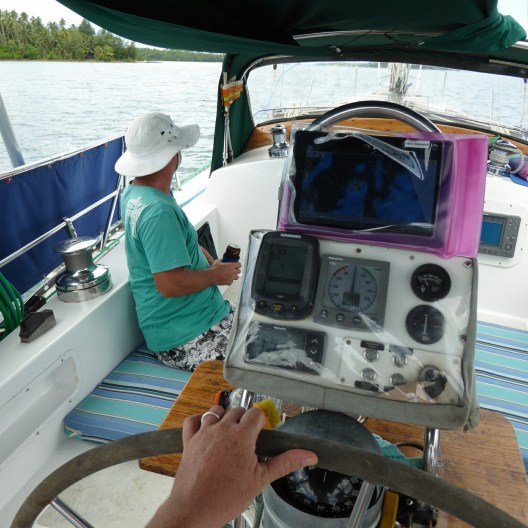 B​olstered by my small success I decided to tackle another job that I would usually leave to Steve. While cleaning the bottom the other day I noticed the anode on the end of the prop was missing. Anodes are pieces of zinc that are attached under the water line as a means of preventing stray electrical current from eating away at the metal bits of your boat. Obviously the propeller anode had done its job, sacrificing itself to our cause, and now needed to be replaced.

This really isn’t a big job. 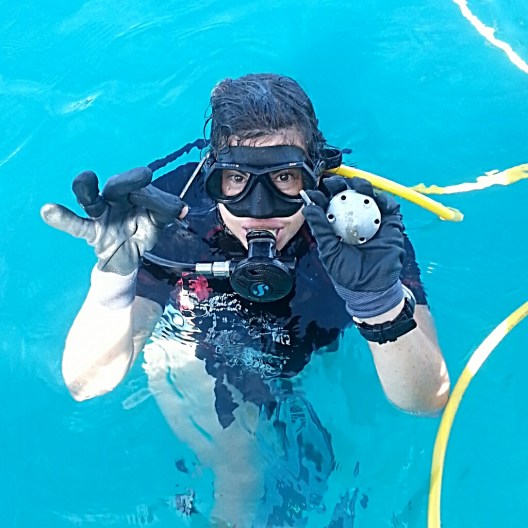 Unscrew three allen screws, clean up the face of the propeller, hold new anode in place and screw the three bolts in place. Sounds simple, until you remember that this all has to be done underwater and so dropping something isn’t really an option. Also, I should mention that I am kind of clumsy, and the odds of me dropping something into the abyss were pretty high. I decided to give it a go anyway.

We had a couple extra screws, included when you buy the new anode for just this reason I expect, so I had a little margin for error. As long as I didn’t drop the allan key and the anode I wouldn’t be in trouble.

I spent a few minutes under the boat cleaning up the prop while Steve cleaned all the gunk off the screws up on deck. Then he carefully passed me the new anode, the allan key and one screw, all of which I white knuckle gripped as I submerged. It took me a couple tries to line up the holes correctly but the first with screw in, the anode firmly attached and the allan key still in my hand I surfaced for the other two screws with a big smile. A few minutes later and then job was done. Nothing lost!

I realize that neither of these are particularly large accomplishments, certainly nothing like setting out by yourself on a sailing adventure. But even the biggest journeys start with only a few small steps, so I am considering them personal successes.