Our bed, the vee berth, is in the bow, and as the name implies is shaped like a “V”, or triangle. It is comfortably wide at one end but quickly gets uncomfortably narrow at the other. Measuring six foot at the widest by six foot down the middle it requires nothing less than a king-sized sheet, a near impossible find outside the western world.

A few years ago, I decided to convert a double duvet cover from our first winter on board in California (not as warm as the Beach Boys made it sound) into a sheet for the bunk. By cutting ¾ of one side of the duvet off, I was left with pocket that fit snuggly around the wide end and enough length to tuck in the narrow forward end. For a while the vee berth looked rather spiffy, better yet the sheets stayed neatly tucked no matter how much we flopped around. However, the tropical sun is harsh and eventually our nice bed sheet developed several small tears.

Recently, I came across two very nice, and rather expensive, white cotton sheets that I inherited long, long ago and have barely used. Unfolding the king-sized flat sheets, I discovered that I had ample material in each to recreate my pocketed vee berth sheet. I had been “saving” these sheets for so many years but all they had been doing was taking up space. With my less is more mantra fresh in my mind I decided to finally put them to use.

I decided to farm out the work

With the help of the security guard at the yard I found just the woman I was looking for in a matter of minutes. Her English wasn’t great, but her machine was quality and when I showed her my old ripped sheet and explained she should use it as a pattern she knew exactly what I was after. With the “excess” she was sure she could manage a couple pillow cases as well. (I guess her vocabulary has been shaped by her sewing skills.)

I returned two days later and found that despite the dirt floor, cramped surroundings and giant pig in a wooden cage nearby, she had done a perfect job; edges properly finished, seams straight and measurements bang on. Her work was professional, not only that but she mended the worn sheet that I had brought to use as a pattern. She asked for 400 pesos, or about $8 USD for her time. I paid without argument, returning the next day with a couple pairs of shorts to be mended and a skirt to be hemmed.

Now, I had a set of custom sheets, but they were still white.

I am not a messy person, but I do have a history of mistakenly making a huge mess with things like paint, caulking and bleach. So, commercial dyes were definitely out. Heading the old adage that “a cup of tea will solve any problem” I decided to try my hand at natural dying using tea, and because I had some that was ground much too fine to use in my French press, coffee too. 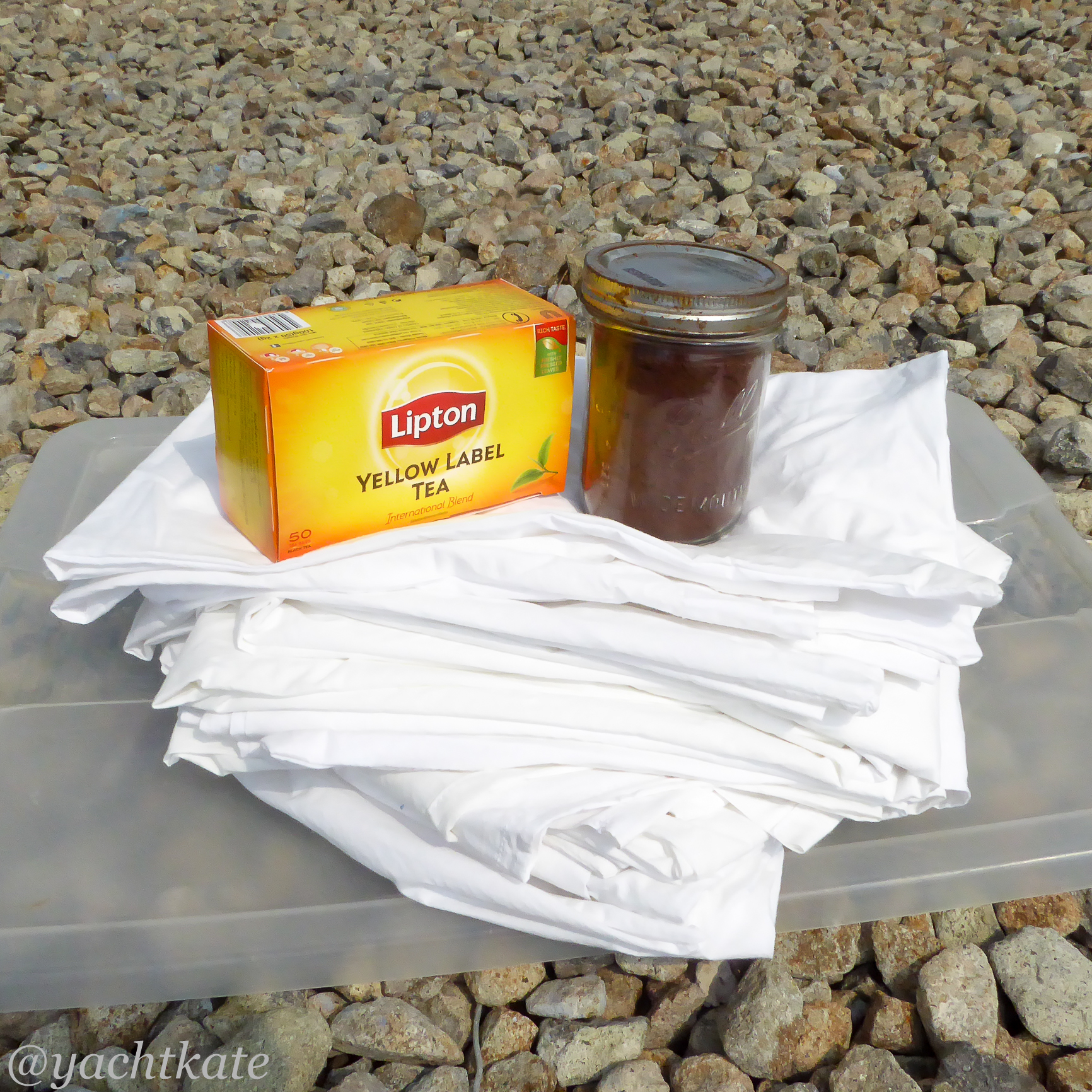 This technique is nothing new

But, it is easy and non-toxic and used materials that are on hand- it fit perfectly with my less is more theme. Better yet it posed no harm to me, the sheets or the environment. The process is simple; brew a heck of a strong pot of tea/coffee, submerse the fabric and then sit back and have a cuppa yourself while you wait for the magic to happen.

I used 50 tea bags and 250 grm of coffee in approximately 5 gallons of water each. However, since my water source was on the ground and my stove up in the boat I skipped the hot water brew step and instead just let the tea/coffee infuse in the warmth of the sun. 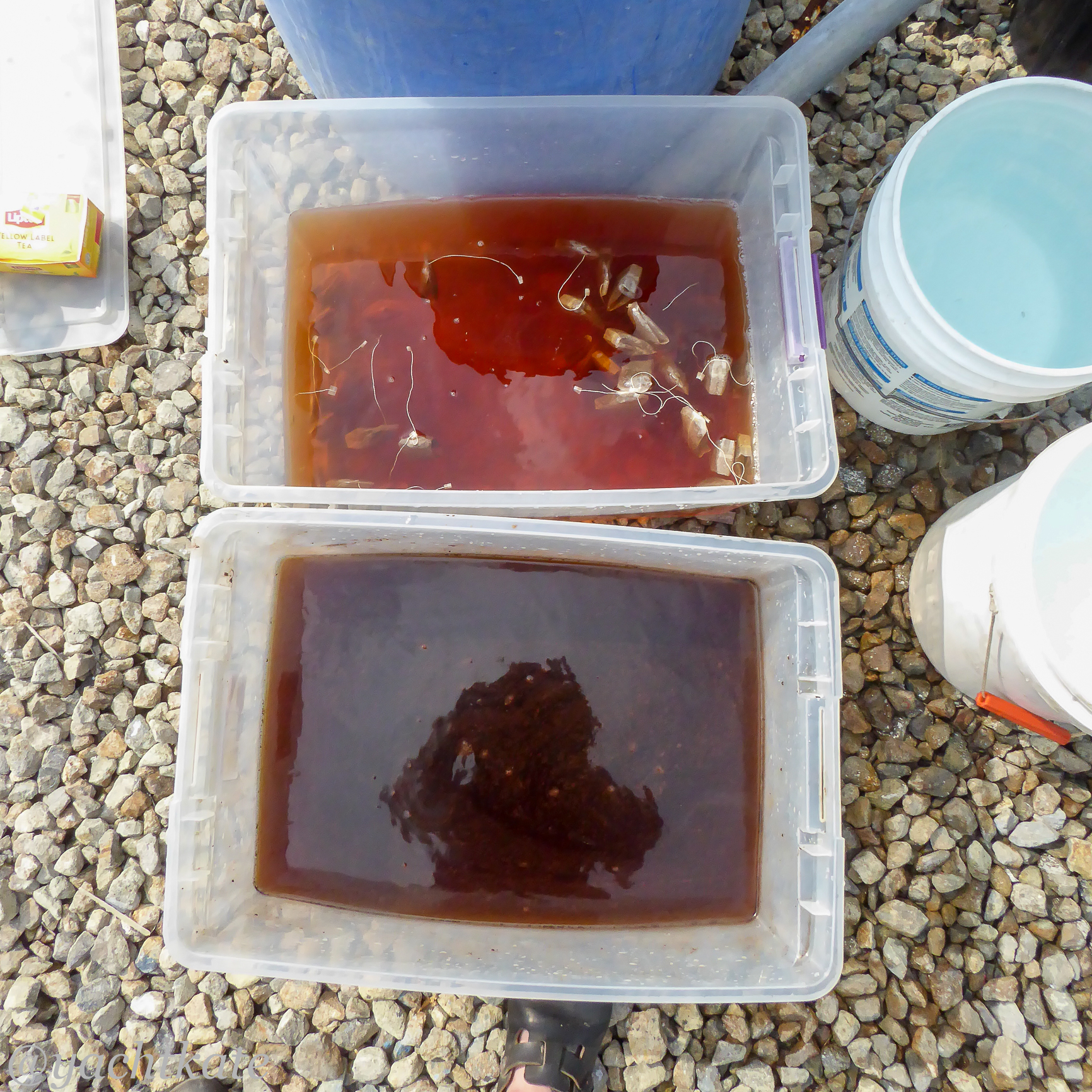 Next, I put a sheet in each bin and stirred and massaged everything around so that the fabric was full saturated. If you are particular, it is important that you keep the fabric fully submerged so that the colour is absorbed evenly. I don’t mind the variations in tone and design, so I just stirred each bin a couple times a day.

I left the sheets in the tea/coffee solutions in the sun for two days. If you were doing this on the stove top you could drastically reduce your dying time down to a couple hours as the heat will intensify how quickly the fabric is saturated. All that was left was to rinse the sheets until the water ran clear, then hang them to dry. If I had access to a tumble dryer I would use the high heat to further set the colour, as the tropical sun is harsh and will naturally bleach the colour over time. Alas, I prefer the smell of lined dried sheets anyway.

The tea produced a lovely mid-beige stain with a bit of a tie-dye effect, but as I said such surprise results are OK by me. Surprisingly the coffee did not produce as dark of a colour as the tea, however it was much more even, despite not being too fussy about it. 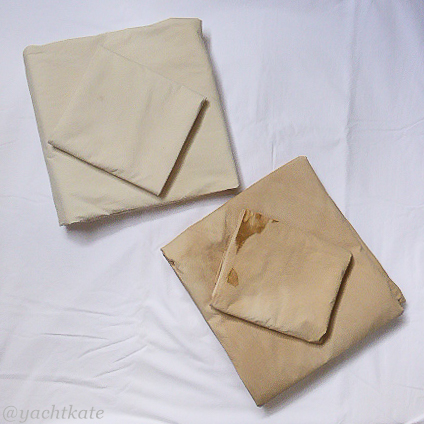 Unlike chemical dyes it does not harm the fibres of the fabrics, so there is no harm in repeating the process if you wish to get a stronger colour. If however, you drop your laundry off at a laundry service (due to water shortages at the yard and the lack of do-it-yourself laundromats around) in a country who “claims” to speak English the colour may fade instantly.

In fact, the laundry ladies will probably nod and smile when you hold up your newly dyed sheet and say, three times clearly, “NO BLEACH!” and you’ll walk away confident that your sheets are in good hands. But, when you go to pick them up three days later, those same laundry ladies will be so proud that they were able to get your sheets clean and white, using probably a whole bottle of bleach, because they were “so, very, very dirty Ma’am.”

So much for less frustration.

No doubt they are still talking about us grotty yachties.

Stayed tuned for a part two…dying with turmeric.