Our meals for the past few months have been pretty simple; rice, a salad or a few veggies sautéed quickly with some garlic and ginger, a bit of roast chicken, maybe an egg that I boiled in it’s shell along with the rice, or a few slices of tofu fried until golden. A splash of soya sauce, a drizzle of spiced cane vinegar, a smattering of fresh chilies and a squeeze of calamansi.

There might be a few nights where I cook noodles in lieu of rice or I fry the leftover rice from the night before with whatever veggies are left in the fridge. I’ve made spaghetti twice this year, once using a store-bought sauce, we’ve eaten maybe 6 potatoes between us. Meals have been about hunger, not so much about enjoyment. After a long, hot, frustrating day that’s all I can muster, and quite frankly all I want.

That is until this past week or so.

I haven’t wanted to cook, so much as bake, something I haven’t done since I was back in Canada. I want to make cookies and cakes and elaborate desserts. And I could care less about eating them, I could easily give all my hard work away. (OK maybe a bite of cake, or a couple slices of fresh bread…just for quality control purposes, of course.)

Perhaps it is because I have a few balls up in the air writing-wise at the moment, and I am anxiously waiting to see if I fumble or catch them when they fall. Maybe it’s the stress and frustration of being more than a month behind our projected schedule in the boatyard, and there is no definite launch date yet in sight. It could be that I am worried about a couple things, situations that I know I have no control over and that will most likely be just fine in the end, but I worry just the same. Whatever the reason I’ve been busy.

It started with a batch of Pinto Bean Brownies, rich and not too sweet. I put them in the fridge and they were a perfect after dinner treat. However, since I kept forgetting to put the beans to soak the night before I only made one batch.

Next the cap on a bottle of beer accidentally got cracked before the bottle was chilled, so I decided to use it to make a loaf of bread. I added oatmeal, sunflower, flax and sesame seeds and baked it on the stove top. My dough rose so much I ended up making two loaves and gave one to a singlehander a few boats down – Steve says I have a soft spot for singlehanders. 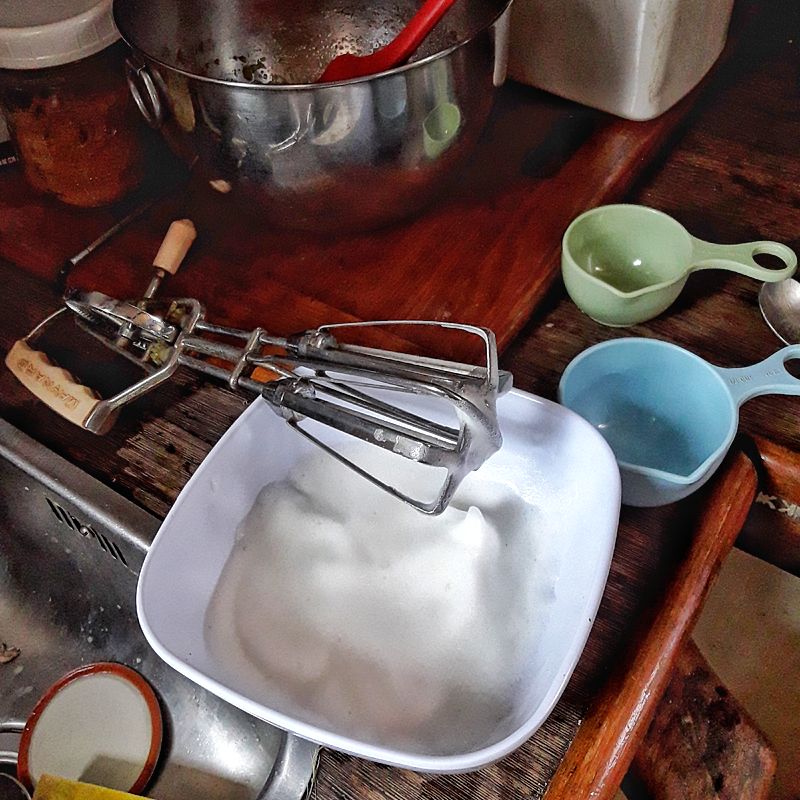 Then I remembered a recipe from my childhood; Saucy Mocha Pudding. It is a simple cake with a velvety coffee chocolate sauce but looks and tastes so elegant that you would never guess it is made all in one pan. The only problem is that is supposed to be baked in the oven, and I loathe turning my oven on. In fact, my oven is more of a spot to store the frying pans and the only time it ever gets lite is when Steve makes pizza. (And you thought I was going to say I keep sweaters in my oven.)

In Australia this kind of desert is called a self-saucing pudding, so I Googled to see if anyone had ever made it in a pressure cooker, and low and behold they had. Swapping a few ingredients to make the Orange Chocolate recipe into the Mocha Pudding I was after I locked on the lid and waited. “Baking” in a pressure cooker might be quick and convenient but it doesn’t have the same instant gratification of popping something in the oven and sneaking peaks through the little dirty window. Nevertheless, it was exciting.

The results, however, were not as exciting. The cake didn’t rise, and the sauce was thin and grainy. Although not inedible it was more like digging through wet cardboard with a drizzle of chocolate glue. Not exactly how I remember it. A little research and a few modifications and round two was in the pressure cooker. The results were better, but still glurggy. 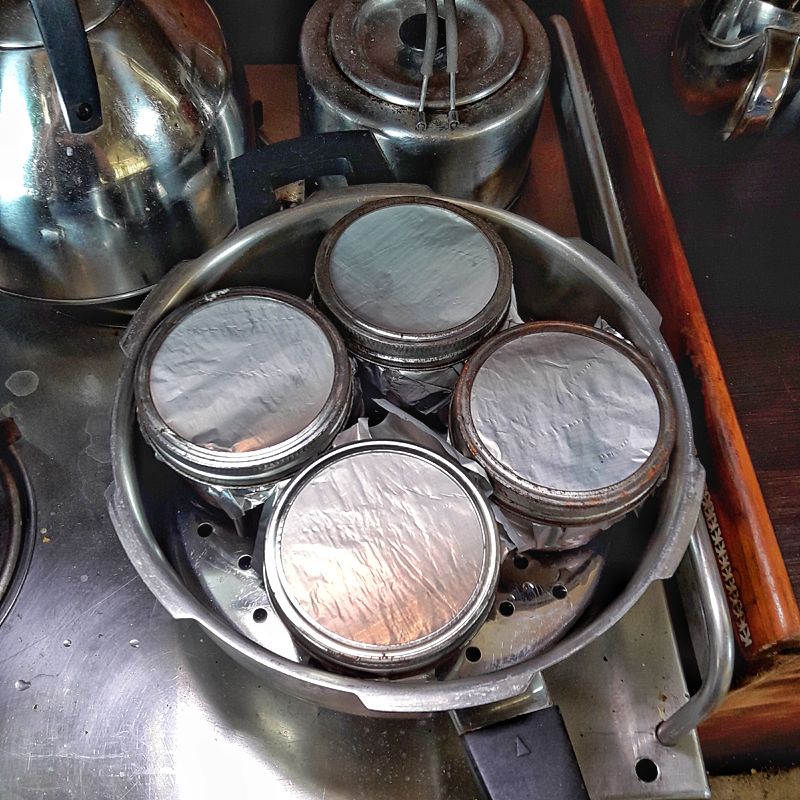 Then on Monday I was chatting to my Mom. She suggested the simplest thing; separate the egg and beat the white until frothy then fold them back into the batter. That afternoon I whipped up another batch and this time the cake batter was light and airy, the volume had increased so much that I had to use 5 jars instead of 4. As I poured the coffee cocoa mixture on top of the batter it started to drip its way through to the bottom, just like it was supposed to. I carefully screwed on the lids and brought the pressure cooker up to the boil. When I cracked the pot 15 minutes later a waft of sticky sweetness filled the cabin and a wave of giddy relief washed over me. 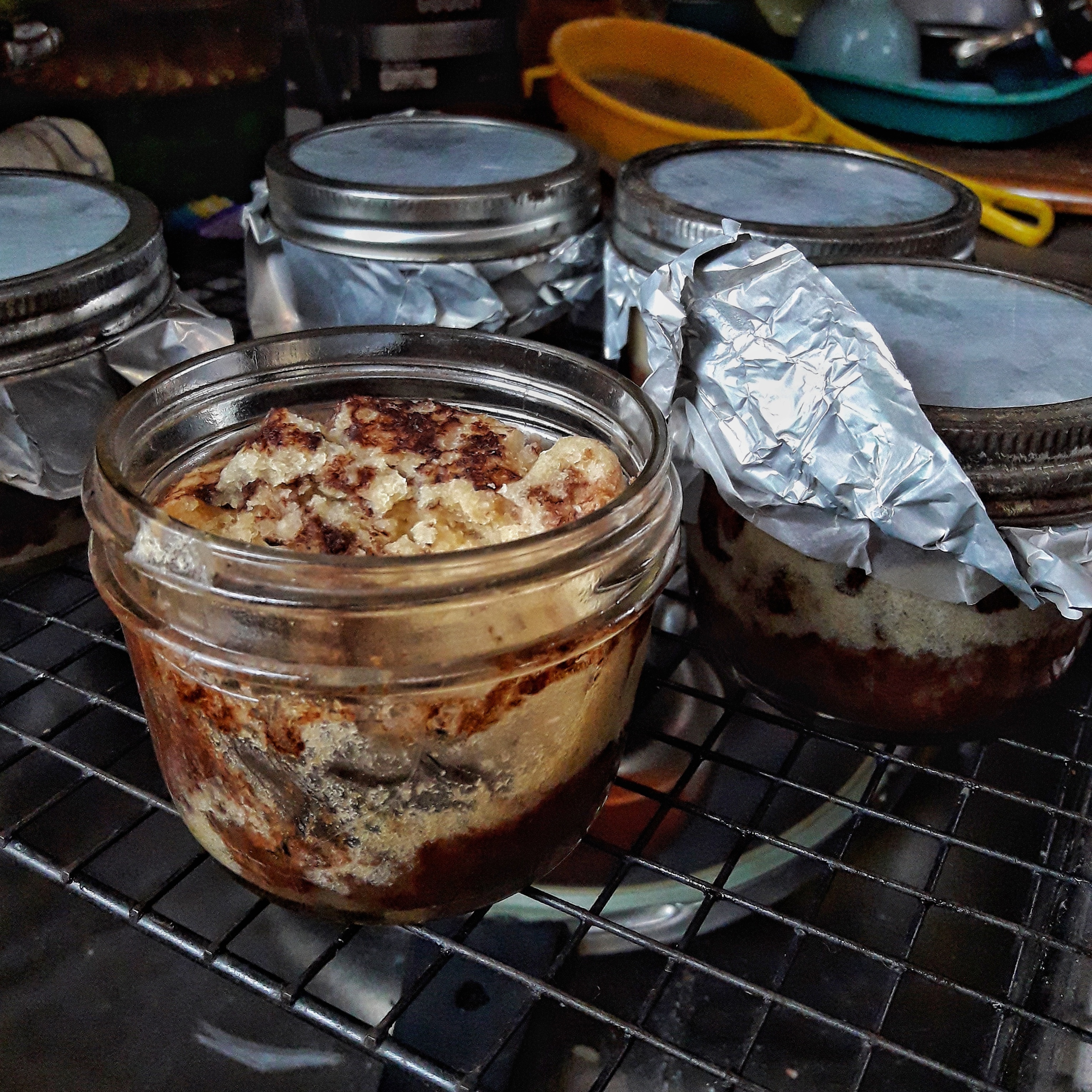 The cake had risen perfectly and was smushed against the jar, airy bubbles and pockets of chocolate sauce tantalizingly on display. I didn’t wait until after dinner, I didn’t wait for Steve to get back from town, I didn’t even wait for it to cool. I gingerly screwed off the lid and not too gingerly tucked in.

It was, of course, delicious, and just like I remember it should be. And as the molten chocolate sauce seared my palate my urge to bake dissolved. One simple success was all that I needed. My anxiousness about our boat difficulties and my concern about the uncertainties of life seemed to melt away. Or perhaps it was just the comforting advice from my Mother that soothed me. 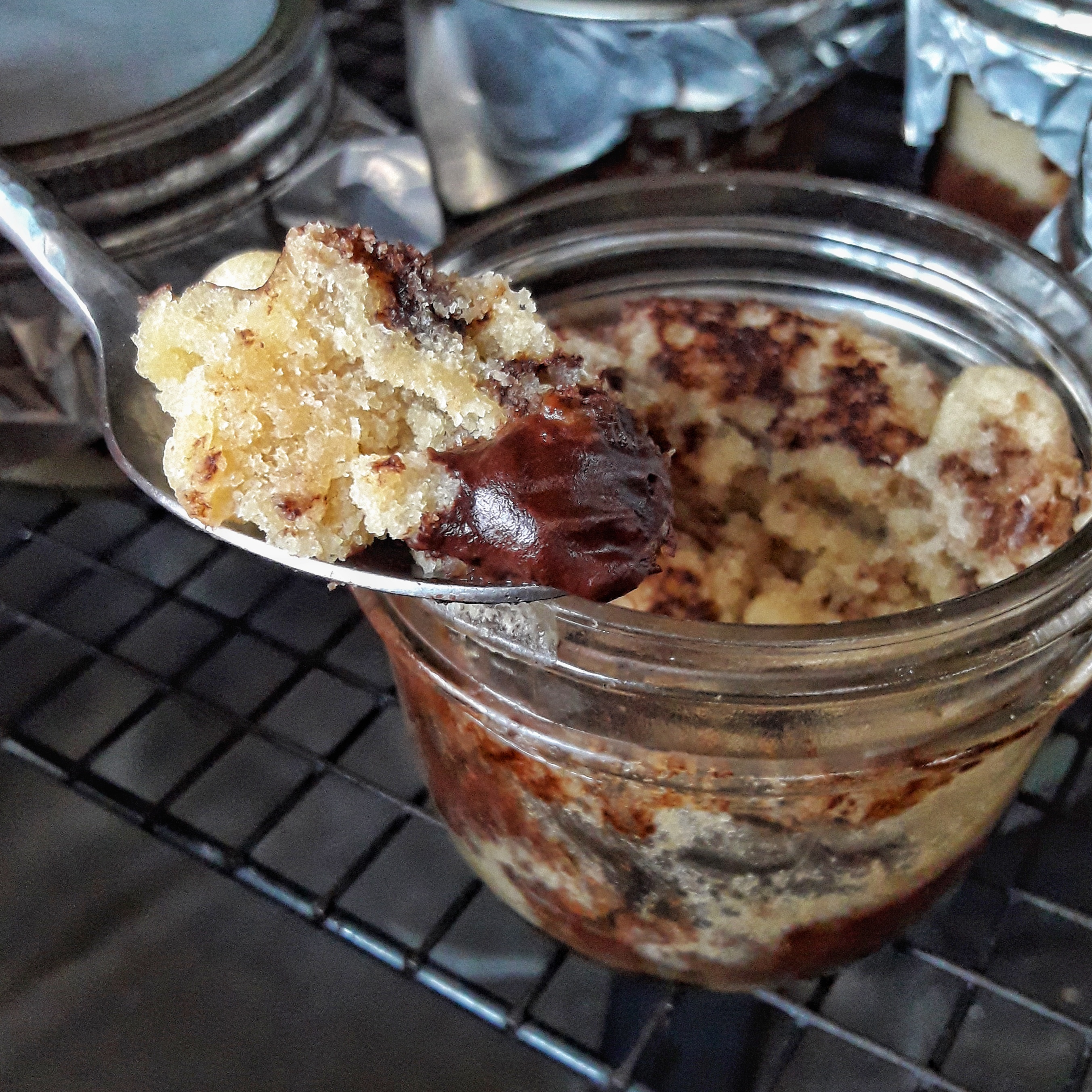 In a large bowl mix together oil, sugar and vanilla. Add the egg yolk and the milk and mix well. Sift flour, baking powder and salt. Add to wet ingredients and mix well. In a separate bowl, whip egg yolks until fluffy. Gentle fold into batter. Divide batter between 5, 1 Cup mason jars.

Heat the coffee, add sugar and cocoa and mix until sugar is dissolved. Gentle pour coffee/chocolate over cake in jars, dividing evenly.

Cut a round of waxed paper and a round of foil to fit over each jar. Using the screw ring secure to jar.